The Old Man on The Island 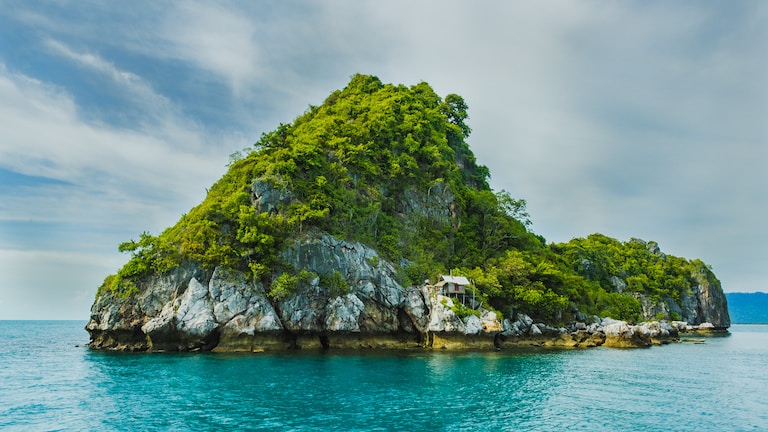 For many years, Rabbi Zeev Kitzes, one of Rabbi Israel Baal Shem Tov’s senior disciples, yearned to travel to the Holy Land. Finally, the long-awaited opportunity arrived, and Rabbi Zeev stood in the Baal Shem Tov’s room to receive his Rebbe’s blessing for a safe journey.

“Remember, Reb Zeev,” were the Baal Shem Tov’s parting words to him, “one must know how to properly answer a question. Weigh your words carefully before you speak.” Rabbi Zeev had no idea what his Rebbe meant with these words, but he kept them near to his heart, certain that their relevance would be revealed to him before long.

He reached the sea without incident and boarded the ship that was to take him to the Holy Land. But at one of the ports of call along the way a mishap occurred. The ship stopped to take on supplies, and the passengers disembarked to spend a few hours on solid ground. Rabbi Zeev, who was deeply immersed in his thoughts, did not hear the call to reboard the ship and was left behind. In growing distress, Rabbi Zeev wandered about this strange place. He had no idea where he was — he seemed to be on some sort of island — nor how long he would have to wait for another ship.

“Reb Yid! Why are you so crestfallen?” he heard a kindly voice ask, and lifting his eyes, found himself looking into a saintly face with luminous features and a snow-white beard. His joy and relief knew no bounds. Yes, there was a Jewish community on the island, fully equipped with a synagogue and mikveh (ritual immersion pool); there would be another ship in a few days, and in the meantime, the old man would be deeply honored to have their esteemed visitor — a disciple of the holy Baal Shem Tov, no less! — as his guest for Shabbat.

Rabbi Zeev’s host turned out to be a veritable Torah scholar, and the two spent Shabbat in prayer and study; Rabbi Zeev felt as if he was back in Mezhibuzh at his Rebbe’s table. On Sunday morning Rabbi Zeev, accompanied by his attentive host, returned to the harbor to meet a ship that had stopped at the island.

In parting, the old man asked: “Tell me, Reb Zeev, how is it with the Jews of your country? How are they faring in our exile?”

“Thank G-d, all is well,” answered Rabbi Zeev, hurrying up the gangplank. “The Almighty does not forsake His people.”

The ship was well on its way out of the harbor when Rabbi Zeev suddenly remembered what the Baal Shem Tov said to him at the eve of his journey. “Woe is me!” he cried. “What have I done! Did not the Rebbe warn me to consider my words carefully before I answer? Why did I not say the truth? Why did I not tell this man of the poverty and the persecutions, of our daily struggle to persevere in face of those who seek to destroy us body and soul?”

Rabbi Zeev was so devastated by his failure to carry out the Baal Shem Tov’s instructions — for he now had no doubt that it was his encounter with the old man on the island that his Rebbe had in mind — that at the next port he got off the ship and traveled back to Mezhibuzh to tell him what happened.

“Reb Zeev,” said the Baal Shem Tov sadly, “every day our father Abraham confronts the Almighty. ‘Master of the Universe!’, he cries. ‘What will become of my children? Why are they still languishing in exile?’ And the Almighty replies: ‘I do not forsake them.’ But Abraham is not appeased. So G-d says to him: ‘Why don’t you ask them yourself? Look, there goes Reb Zeev Kitzes, an honest and upright Jew, on his way to the Holy Land. Why don’t you ask him?'”

Coming In for a Landing

The difference between destructive and constructive sadness