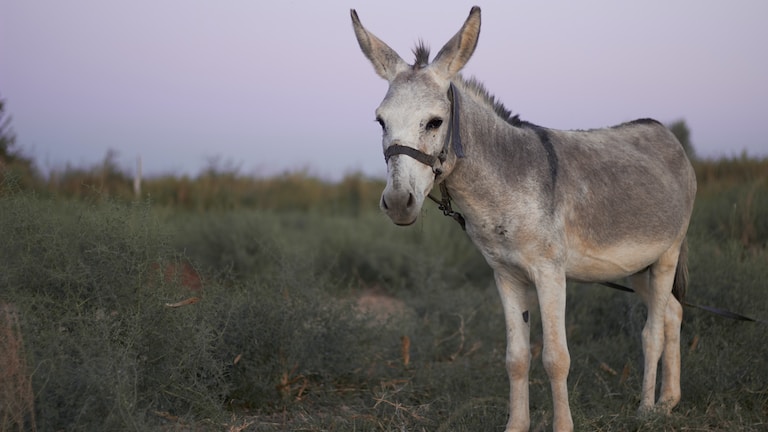 And Moses took his wife and children, set them upon the donkey, and returned to the land of Egypt — Exodus 4:20

The prophet Zechariah describes Moshiach as “a pauper, riding on a donkey.” The simple meaning of the verse is that Moshiach — whom the Midrash describes as “greater than Abraham, higher than Moses, and loftier than the supernal angels” (Yalkut Shimoni after Isaiah 52:13) — is the epitome of self-effacement. Indeed, humility is the hallmark of the righteous: they recognize that their tremendous talents and achievements, and the power vested in them as leaders, are not theirs but their Creator’s. They live not to realize and fulfill themselves, but to serve the divine purpose of creation.

On a deeper level, Moshiach’s donkey represents the essence of the messianic process: a process that began with the beginning of time and which constitutes the very soul of history. In the beginning, the Torah tells us, when G-d created the heavens and the earth, when the universe was still empty, unformed, and shrouded in darkness, the spirit of G-d hovered above the emerging existence. Says the Midrash: “‘The spirit of G-d hovered’ — this is the spirit of Moshiach.” For Moshiach represents the divine spirit of creation — the vision of the perfected world that is G-d’s purpose in creating it and populating it with willful, thinking and achieving beings.

Moshiach’s donkey has a long, prestigious history. Time and again it makes its appearance through the generations, surfacing at key junctures of the messianic process. Each time we see it fulfilling the same function, but in a slightly different manner — reflecting the changes our world undergoes as it develops toward its ultimate state of perfection.

Moshiach’s donkey first appears in the year 2084 from creation (1677 bce), as Abraham heads for the “Binding of Isaac”, his tenth and greatest reiteration of his faith in G-d. “Abraham rose early in the morning and readied his donkey,” the Torah relates (Genesis 22:3), and loaded it with supplies for the Binding (the wood, the fire, and the knife) for the three-day trek from Hebron to Mount Moriah in Jerusalem.

Seven generations later, Moses was also dispatched on a mission by G-d: to take the Jewish people out of Egypt and bring them to Mount Sinai, where I shall communicate to them their mission in life as My chosen people. So “Moses took his wife and children, set them upon the donkey, and set out for Egypt.” The donkey, stresses the Torah — the very same donkey, our sages explain, that served Abraham and that will bear Moshiach.

Abraham, Moses and Moshiach — three who employ this erstwhile donkey in their fulfillment of G-d’s will. But the extent to which the donkey is involved in their mission differs. With Abraham, it carries his supplies; with Moses, his wife and children; while Moshiach is described as himself riding the donkey.

Conventional wisdom has it that the spiritual is greater than the physical, the ethereal more lofty than the material. Nevertheless, our sages have taught that G-d created the entirety of existence, including the most lofty spiritual worlds, because “He desired a dwelling in the lower world.” Our physical existence is the objective of everything He created, the environment within which His purpose in creation is to be realized.

G-d desired that we refine and elevate the material existence; that the physical reality, whose concreteness and self-centeredness obscure our inner vision and distort our true priorities, be redirected as a positive force in our lives; that we bring to light the goodness and perfection inherent in all of His creation, including — and especially — the lowliest of His works, the material world.

The Hebrew word for donkey is chamor from the word chomer, material. Moshiach’s donkey is the material beast harnessed, the physical directed to higher and loftier ends.

But humanity’s mission of elevating the material entails a long and involved process, an historic effort in which each generation builds upon the attainments of its predecessors. For the physical and the spiritual are worlds apart; indeed, the very nature of G-d’s creation is such that a vast gulf divides the two, making them natural antagonists. By nature, almost by definition, a person devoted to spiritual pursuits shuns the material, while material life coarsens a person’s soul and dulls his or her spiritual sensitivity. Only when G-d descended on Mount Sinai was the wall between spirit and matter breached. The divine reality revealed itself within the earthly reality; the Torah was given to man, enabling him to sanctify the mundane, to express the all-pervading truth of G-d within, and via, the material world.

The Midrash uses the following parable to explain the significance of the event:

Once there was a king who decreed: “The people of Rome are forbidden to journey to Syria, and the people of Syria are forbidden to journey to Rome.” Likewise, when G-d created the world He decreed: “The heavens are G-d’s, and the earth is given to man” (Psalms 115:16). But when He wished to give the Torah to Israel, He rescinded His original decree, and declared: “The lower realms may ascend to the higher realms, and the higher realms may descend to the lower realms. And I, Myself, will begin” — as it is written, “And G-d descended on Mount Sinai,” and then it says, “And to Moses He said: ‘Go up to G-d’.”

This explains the difference in the extent to which Abraham and Moses involved the material donkey in their respective missions. Abraham, the first Jew, began the process of sublimating the material, of realizing its potential to express the goodness and perfection of the Creator. But Abraham lived before the revelation at Sinai, before G-d rescinded the decree that had divided the world between higher and lower, between matter and spirit. In his day, the original order instituted at creation still held sway: the physical and the spiritual were two separate, incompatible worlds. The most Abraham could do was to harness the physical to serve the spiritual, to use the donkey to carry the accessories of his divine service. The physical remained as coarse as ever and could not directly be involved in his spiritual life; nevertheless, Abraham took the first step in wresting the material from its inherent self-absorption by utilizing it, albeit peripherally, to assist in his service of G-d.

Moses, on the other hand, was embarking on the mission that was to culminate in his receiving the Torah, the medium by which G-d empowered man to dissolve the dichotomy between the higher and lower domains. The Torah instructs and enables us to sanctify even the most mundane aspects of our lives, to integrate our material selves and environment in our spiritual goals. So Moses used the donkey to carry his wife and children. A person’s wife and children are an extension of his own self — in the words of our sages, “a person’s wife is like his own body” (Talmud, Berachot 24a) and “a child is a limb of his father” (ibid., Eruvin 70b). Beginning with Moses, the material began to play a central and intimate role in our life’s work.

But Moses marks only the beginning of Torahs effect on the physical world. Ever since, whenever a person uses a material resource to perform a mitzvah — e.g. giving money to charity, using the energy his body extracts from his food to fuel his fervor in prayer — he “refines” these physical objects, divesting them of their mundanity and selfishness. With each such act, the physical world becomes that much holier, that much more in harmony with its essence and function. Each such act brings closer the day when our world will finally and completely shed the husk of coarseness that is the source of all ignorance and strife, bringing on a new dawn of universal peace and perfection.

So Moshiach, who represents the ultimate fulfillment of Torah, himself rides the donkey of the material. For he heralds a world in which the material is no longer the lower or secondary element, but an utterly refined resource, no less central and significant a force for good than the most spiritual creation.

Based on the teachings of the Lubavitcher Rebbe; adapted by Yanki Tauber