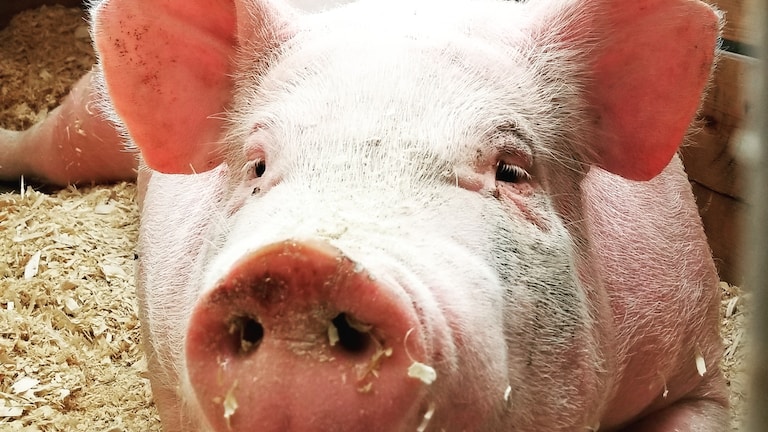 Although far from alone in the litany of non-kosher animals, the pig seems to stand in a class of its own. True, bear or lion meat are far less common menu items than pork or ham. But our feelings towards the pig seem to run far deeper than mere culinary distaste. What makes the pig distinct?

In general, when describing the kosher status of beast, fowl, or fish, the Torah lists those which are in the minority. Kosher birds are more numerous than those that are non-kosher, so the Torah mentions all impure species by name. On the other hand, there are far fewer kosher than non-kosher animals, so only the kosher ones are specified in the verse. There are four animals that are an exception to this rule: the camel, the rabbit, the hare and the pig. They are specifically singled out due to an ambiguity surrounding their status. Kosher animals must possess two characteristics: They must chew their cud and have split hooves. The camel, the hare and the rabbit are all ruminating creatures, but their hooves are not split. The pig, on the other hand, has a cleft hoof, but does not chew its cud.

This may account for the pig’s special “notoriety” within the class of non-kosher species. Most animals are fairly straightforward: their status is certain, and they are fairly easy to identify and classify as kosher or non-kosher. The four enumerated above, however, pose a problem. They possess one kosher sign, but not the other. They might be considered “semi-kosher” in our eyes, although they are no less impure than the other animals. Yet it is not the camel, the hare or the rabbit that bears the full brunt of our aversion, but the pig. For the pig stands out even within the class of “imposters.” The other three chew their cud, a not necessarily obvious phenomenon, but do not have split hooves, which are more readily apparent. The pig is different. It brazenly flaunts its foreleg, boasting of its split hoof, while its lack of cud chewing, which would give it away as a non-kosher animal, remains obscured. It is this very attempt to parade and masquerade itself as a kosher creature which earns for the pig its unique status among animals.

The laws regarding the pure and impure species are placed towards the end of the Torah portion of Shemini, literally, “the eighth.” It is a reference to the eighth day of consecration of the Tabernacle, which consummated the seven preparatory days which preceded it. Seven represents the parameters of existence–the seven-day cycle of time, seven colors on the spectrum. Eight symbolizes a transcendent dimension that rises above and sheds divine light upon the cycle of seven. Our task is to attempt to create a fusion of the physical and transcendent aspects of the universe, through utilizing all physical objects for a more sublime purpose. The Holy Temple is the quintessential example of physicality being transformed into G-dliness. Yet the conclusion of the Torah portion of Shemini, which discusses pure and impure animals, signifies a higher level still. It portrays holiness being drawn into the corporeality of the animal kingdom, a far more challenging task of refinement and elevation.[1]

Within the task of elevating the animal kingdom, there are two distinct modes. Certain animals are elevated through slaughtering them in a proscribed manner, and consuming them as food, with the intention of strengthening our bodies and utilizing that strength to continue our Divine service. Other animals are consecrated precisely by our rejection of them. Their very nature conceals the Divine spark which vivifies them, and only through categorizing them as “impure,” and avoiding their consumption, can we tear off the mask of unholiness and reveal the Divine light hidden within.

Yet even within this class, the pig defies and resists our efforts. It enclothes itself in a garb of purity, and seeks to deceive us regarding its true nature. The pig represents the type of evil in the world which is hardest to resist and combat. It encompasses all forms of flattery and deception, the suave and smooth-talking villains who worm their way into our confidence and take root in our hearts, before we become wise to their true intentions. Our greatest challenge is not fighting the blatant evil of the world, but its more subtle and deceptive forms, which come packaged in a guise of goodness and truth.

Yet the pig’s ability to assume the semblance, however superficially, of a kosher animal reflects on a level of holiness embedded deep within it. For only if it contained within it a hidden good,[2] would it be able to pull off its clever charade. No falsehood can long be maintained without some basis of truth. Our strong antipathy towards the pig, and our solid rejection of it, serve to “cut off” the part of it which is negative and evil, and leave only its pure essence. Only regarding the pig does the Midrash state: “Why is the pig called ‘chazir’? For in the future, it will be returned (‘lehachazir’) to us.[3]” In the Messianic Era, when the true Divine nature of every creature will be openly revealed, the pig will stand vindicated as a kosher animal. Because with all its posing and prancing, the pig does one thing for us. It forces us to confront our own insidious evil nature, combat it, and ultimately rise above it. So the choice is ours. We can mask our deficiencies by verbally maligning the innocent pig, or we can recognize the pig for what it is: a mirror to our own animal selves. We must concentrate on perfecting and purifying our own animal souls, and G-d will reciprocate by “koshering” the pig.

1. (back to text) Fundamental to Jewish thought is the concept of uniting the diversity of the universe toward one higher end. Initially, each of the four kingdoms which comprise the universe — mineral, vegetable, animal and human — stand alone. Only the human being, through his or her actions, has the unique power to unite and transform all the kingdoms. When a person utilizes or consumes mineral, vegetable or animal, and harnesses its energy toward constructive ends, he elevates it to a level that it could never have attained on its own.

2. (back to text) All phenomena, every personality, has a so-called “subconscious,” a beneath the surface root that is the underlying cause for a particular behavior. The Kabbalah calls it the “spiritual spark” within each fiber of existence. This spark is the energy which, after evolving and manifesting itself in physical form, informs and shapes the entire spectrum of personality types in existence.

(Reprinted from The Week in Review Vol XI No 30)